Advanced Bicycle Routes in Singapore That Are Foldie-Friendly

Slopes are literally an uphill challenge that many riders tend to avoid. However, they are good opportunities for individuals to burn, challenge, and train their muscles.

Our advanced cycling routes are specially curated for hardcore riders who enjoy traveling endlessly on their bikes and aiming to burn as many calories as possible. Daredevils can take heart in knowing that there are many rolling slopes featured, with different types of steep inclines and breathtaking declines. Exploring enthusiasts will also be thrilled with the panoramic sceneries encountered.

Tired of the beginner and intermediate cycling routes around Singapore? Experience the ultimate freedom of going fast on two wheels in our four advanced bicycle routes in Singapore for cycling pros. 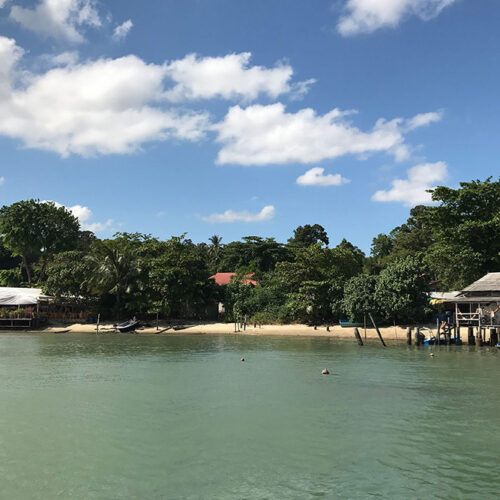 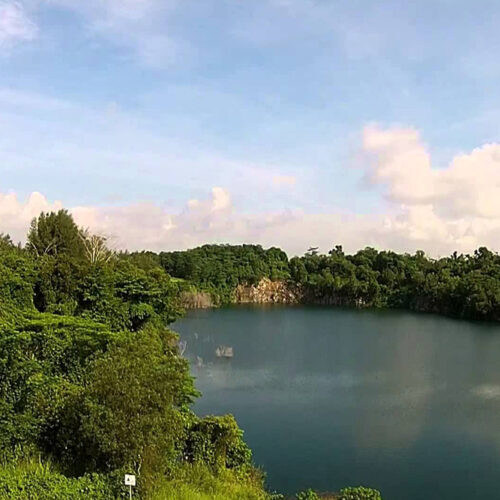 Cycling is the best transport option in Pulau Ubin as there is quite a distance between attractions. The island’s cycling routes –twisting uphill and downhill slopes as well as rocky mountain biking trails through the forest – are Pulau Ubin’s distinct features for cyclists who like to take risks.

Take a bumboat ride (costs $4 per ride, with an extra $2 for bicycles) at Changi Point Ferry Terminal to Pulau Ubin. There are no scheduled departure timings as the bumboats only set off when there are sufficient (9 to 12) passengers.

The first destination on your list will be Chek Jawa Wetlands, the furthest out of all the attractions. There are two coastal and mangrove boardwalks, a lookout jetty, and a 21-metre high Jejawi observation tower for you to explore. No cycling is allowed here so park your bikes at the nearby bicycle station and set-off to explore the area on foot.

Afterwards, take a detour to the two main camping sites, Mamam campsite and Jelutong campsite, as well as Ketam Quarry, which is home to the iconic Ketam Mountain Bike Park.

For individuals who are more into culture and heritage, Pulau Ubin is well-known for its many shrines and temples. The two most popular ones are the Fo Shan Ting Da Bo Gong Temple and the German Girl shrine.

If your legs are still up for it, make the steep and rocky climb up to Bukit Puaka for a breathtaking view of the Ubin quarry.

Finally, end off your ride and tickle your senses at the Sensory Trail Garden, where you can see  fruit trees like papaya, banana, rambutan and breadfruit. Throughout your entire ride, also keep an eye out for wild boars and monkeys which are aplenty around the island. 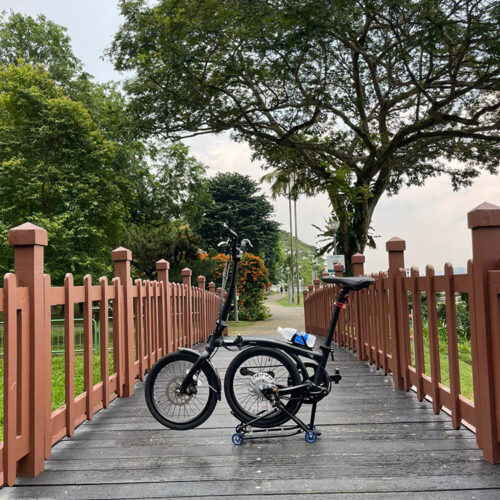 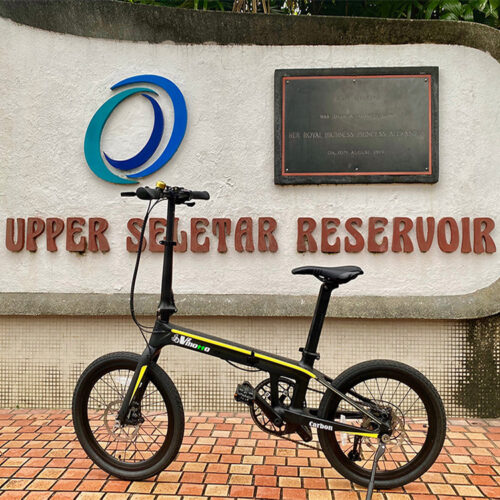 There’s certainly more to Mandai than just the Singapore Zoo, River Safari, and Night Safari. The Mandai Loop is very popular with cycling enthusiasts due to its winding slopes and cool temperatures that give you an out-of-this-world experience.

The journey begins at Shell Petrol Kiosk (Upper Thomson Road) or MacRitchie reservoir entrance for those who intend to drive. Make your way to Old Upper Thomson Road on the left and into Mandai Road. The rich surrounding  forests are brimming with life that excites your senses – swaying trees, roaring winds, as well as wild birds flying around.

Flex those muscles and go all out to reach the top of the flyover. You’ll be rewarded with a great view of the Upper Seletar Reservoir. The steep downhill here is perfect for thrill-seekers to easily hit high speeds. Remember to keep your hands on those brakes! Continue onwards to the Singapore Zoo and mountain biking Track 15 (T15). Then, take a break at the nearby Shell petrol kiosk checkpoint.

The next two destinations to aim for will be the Adam Road flyover as well as Kheam Hock park. End off at either the MacRitchie Reservoir carpark or the Shell petrol kiosk where you first started. 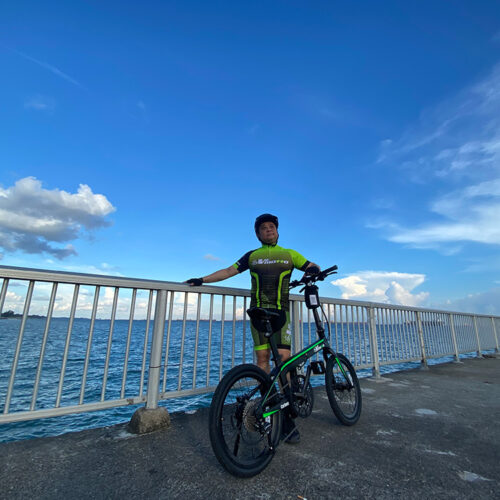 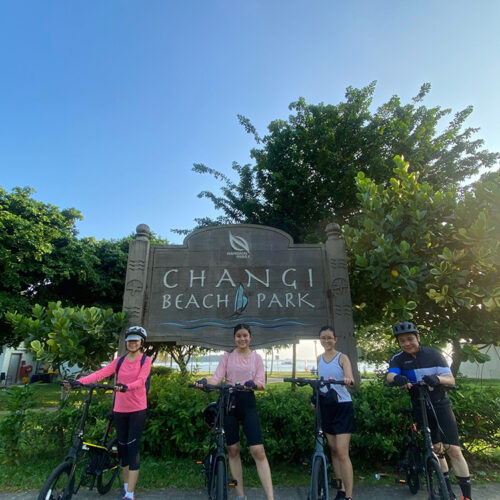 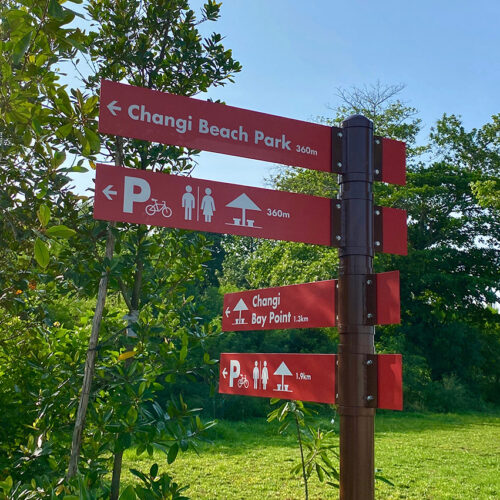 We’ve previously featured East Coast Park in our article promoting beginner cycling routes in Singapore. If you think that route is like a walk in a park, why not cover all the Eastern grounds in Singapore at one go with this extensive 42km-long loop?

The Eastern Coastal Loop may only cover a quarter of Singapore, but it packs the full experience.

This advanced cycling route is a great way for cyclists to build their stamina and train themselves for the full Round Island Route. It’s also fun for advanced cyclists who prefer to fully cycle on Park Connector Networks (PCN).

Begin your journey at East Coast Park and cycle in the direction of Parkland Green all the way to Changi Beach Park. Cycle down memory’s lane at this park which retains its rustic kampung ambience in the far East side of Singapore. The nearby Changi Point Coastal Walk is also a less well-known nature spot amongst Singaporeans. This boardwalk is tucked right at the Western end of Changi Point. A sanctuary for nature lovers, the terrain, flora and fauna have been well-integrated into the coastal walk.

Calm your senses at Pasir Ris Park and continue following the PCN. It will pass through Bedok Reservoir Park, a park that is a picture of idyllic charm nestled in the middle of Bedok. Take pleasure in the sights of the blue, open waters and being surrounded by the best of nature.

Head on towards Singapore Sports Hub and have a break at the nearby malls.

After your break, get those gears running again and pedal on towards Gardens by the Bay (East), where you’ll end your cycling adventure. 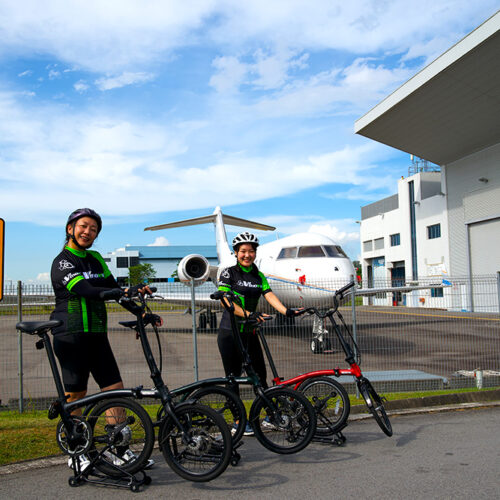 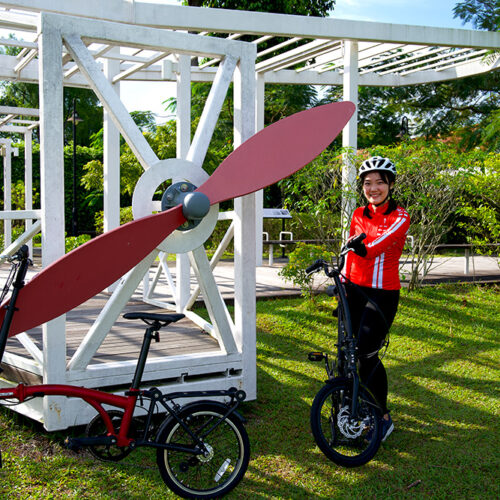 *For your own safety, ensure that you can comfortably cycle at least 100km before fully attempting this 150 KM route at one shot.

It is all about the mind, will, and body when you attempt the Round Island Route.

The whole journey is expected to take 10 – 12 hours so before you begin, these are some essential gear and accessories to bring along:

Riders at Rower’s Bay can take the chance to explore the nearby Seletar Reservoir, cross the idyllic Yishun Dam, or even catch a glimpse of Singapore’s Last Fishing Village. After the exploration, chill out at one of the cafes nearby Seletar Aerospace Park.

Once you complete this route, congratulations, you’ve unlocked the achievement of conquering the whole of Singapore!

Cycling the Round Island Route tests all five hallmarks of riders: speed, endurance, power, core, and strength. If you find yourself running out of breath, another alternative is to split the route into two or more days to complete.

This is where a good foldable bike comes in handy. A foldable bicycle, also known as a folding bicycle, is like what its name suggests. It can easily collapse and fold into a compact form via clamps or hinges when on the train, bus, or car. This is extremely ideal for riders who wish to split up Round Island Route and return back to complete it again.

High Performance Folding Bicycles in Singapore
Straining muscles and burning lungs – these are the two common symptoms faced when you attempt the advanced cycling routes in Singapore.

To make your cycling adventures easier, why not invest in a quality folding bicycle with a higher speed range? They can cover the longer distances and steeper inclines quickly, saving you both time and energy. Shop for affordable folding bicycles today.
Browse
Share this